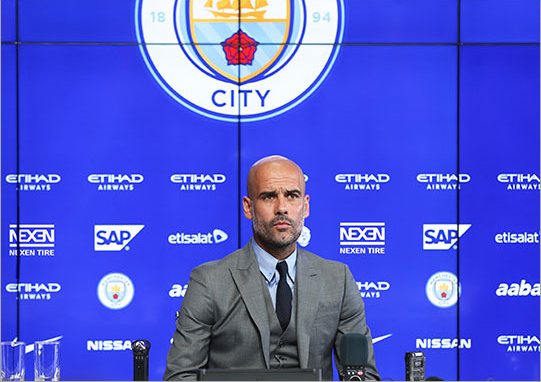 Manchester City PC has appointed a new manager to get the team out of the recent slump with the team being run under the leadership of Pep Guardiola starting from the Pre-Tour in July.

As the former manager of the prestigious FC Barcelona and FC Bayarn Munich has had an incredible career as a great coach. including winning the UEFA Champions League as the youngest manager. and achieving three consecutive wins in the Bundesliga. Expectations for his performance as the new leader of the team are high.

During the press conference though. The NEXEN TIRE branding stood out significantly. The NEXEN TIRE logo was constantly exposed in the main background. and a numberof related reports through videos as well as images have been published through major media outlets including BBC. Skysports and The Telegraph. magnifying the sponsorship impact.

Apart from its effort to reorganize the team, Manchester City FC also launched its new logo on July 4’“. focusing on its branding activity.

Along with the team’s efforts, NEXEN TIRE will also strive to enhance its global brand awareness and brand preference by partnership with Manchester City FC during the 2016/2017 season.